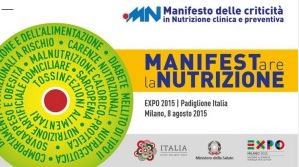 THE NO PROFIT ASSOCIATION “UN FILO PER LA VITA” IS TAKING PART IN EXPO 2015 FOR THE SCIENTIFIC EVENT “MANIFESTARE LA NUTRIZIONE – MANIFESTO DELLE CRITICITÀ IN NUTRIZIONE CLINICA E PREVENTIVA” (MANIFESTO OF THE DIFFICULTIES IN CLINICAL AND PREVENTIVE NUTRITION N.D.R.)

On 8th of August the no profit Association “Un Filo per la Vita” will be in the EXPO – Universal Exposition hosted in Milan for the event ” Manifestare la Nutrizione – Manifesto delle Criticità in Nutrizione Clinica e preventive” sponsored by Italian pavilion of Expo 2015, elaborated and subscribed by 19 scientific associations, 12 universities, 6 foundations and 5 citizens and patients associations.

The network, in which “Un Filo per la Vita” ratifies its presence thanks to the contribution of the President Sergio Felicioni, denotes how much the necessity to intervene in clinical and preventive nutrition is felt.

The document redacted for Expo wants to be a constructive encouragement for authorities considering the inadequate grants of public benefits on this matter.

The event promotes a serious consideration among Italian citizens on nutritional topics, so that they will be adequately informed about the main difficulties that our country has to deal with.

The president Sergio Felicioni, has been invited to intervene in the roundtable “Associazioni e Aziende per un reale cambiamento di paradigma socio-sanitario” (associations and firms for a real social and healthcare improvement n.d.r.) in order to show the position of no profit organisations in the context of the subjects, in particular on artificial nutrition, reporting out patients’ experience.

The other exponents that will join the meeting will be: Egidio Archero – President of the national association of diabetics FAND, Roberto Messina, Hannes Berger – CEO of Dr Schaer, Paolo Tosini – CEO of Lyopharm.

Furthermore political authorities and social institutions have been invited to the workshop together with all the organisations listed previously.

The main aim of the meeting is laying the foundation for “culture of nutrition” still lacking nationally and internationally.

At the end of the works will be released a take home message to spread and share all over the world.